All of our services are tailored to meet the needs of our patients. Many of our services are provided in one of our wonderful kid-friendly offices, but we also provide services in daycares, early childhood centers, preschools, and regular schools. Our services include: Speech Therapy, Physical Therapy, Occupational Therapy, Nutritional Counseling, and Behavior Therapy.  Click below to learn more about each service. 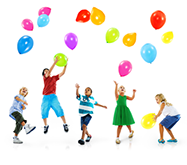 Our Speech-Language Pathologists diagnose and treat individuals who have communication, oral-motor, or feeding deficits. All of our therapist have a Certificate of Clinical Competence (CCC) from the American Speech and Hearing Association (ASHA). We provide scheduled evaluations for your child which will determine if they will require further treatment. Our therapists will then implement an individualized treatment plan for your child's needs.

We treat the following speech-related disorders in children:

f you think your child may be in need of speech therapy, please contact us for a consultation or screening; we can also discuss the possibility of in-home services with you at that time.Expressive language refers to what an individual is able speak or thoughts that an individual is able to formulate into words.
Expressive language abilities vary among children, however, as a general rule, a child should have a minimum of 50 words in his or her active vocabulary by the age of two. A child should begin combining two words such as “more milk”, “go night-night”, “bye mommy” at two years of age. By the age of three, a child should have several hundred words in his or her active vocabulary.

Oral-motor deficits include the difficulty of an individual to use and coordinate his or her lips, tongue, teeth, and jaw movements. This difficulty often time results in deficits in speech and/or feeding.

Characteristics of Children with Oral-Motor Problems:

Articulation refers to the actual production of speech sounds and words.

Articulation development follows a sequential order and developmental errors are to be expected by each stage of development.

Verbal apraxia is a speech disorder that interferes with a child's ability to correctly pronounce sounds, syllables and words. It is the loss of ability to consistently position the articulators (face, tongue, lips, jaw) for the production of speech sounds and for sequencing those sounds into syllables or words. Generally, there is nothing wrong with the muscles themselves. The child does not have difficulty with non-speech activities performed with the muscles such as coughing, chewing or swallowing. However, the area of the brain that tells the muscles how to move and what to do to make a particular sound or series of sounds is damaged or not fully developed. This makes retrieving the "motor plan" for saying a word difficult.

As a result, even though the child knows what he wants to say, he cannot say it correctly at that particular time. Sometimes he cannot even begin. Either the wrong sound comes out, or many sounds are left out all together. At that particular time, the motor plan is not accessible. These errors are not under the child's voluntary control so he often cannot correct them, even when trying his hardest. Frequently, a child will be able to produce a sound or word at one time and not be able to say is again when he wants to. A parent may hear words when the child is playing alone or when he is angry, but when asked to say the same word, he can't. This can be very frustrating for both the child and the parents.

Voice disorders include problems with the pitch, volume, or quality of a child’s voice when he or she is speaking. Voice disorders may sometimes cause discomfort for a patient when speaking.

Fluency disorders include problems such as stuttering, which is characterized by the interrupted flow of speech by repetition of sounds, prolongation of sounds, and abnormal stoppage of sounds or words.

Pragmatic Disorders Children with these impairments have special challenges with the semantic aspect of language (the meaning of what is being said) and the pragmatics of language (using language appropriately in social situations).

Some signs of a pragmatic disorder include:

Language-based reading disorders Language-based learning disabilities are problems with age-appropriate reading, spelling, and/or writing. The child who has

language-based reading disorder has trouble with both the spoken and the written word.

These problems may include difficulty with the following:

Physical Therapy promotes strength, movement, improved range or motion, improved balance, and functional independence at the highest level possible. Our physical therapists work closely to help children develop the independence necessary to successfully participate in their environments. Our staff will also fit, size and order orthotics for patients when appropriate or as needed. At TherapySource for Kids, it is our goal to make the most of each child's abilities as opposed to focusing on their disabilities.

Primary diagnoses and treatments include the following:

We provide scheduled evaluations for your child which will help determine if they will require further treatment. Our therapists will then implement an individualized treatment plan for your child's need. If you think your child may been in need of physical therapy, please contact us for a consultation or screening; we can also discuss the possibility of in-home services with you at that time.

Occupational Therapy is a form of therapy that provides rehabilitation through the performance of activities required in daily life. Our qualified therapists will help prepare your child through appropriate learning and developmental techniques. They will help provide your child the support they need to participate in desired daily life activities and occupations.

Your child might benefit from OT if they have:

We provide scheduled evaluations for your child which will help determine if they will require further treatment. Our therapists will then implement an individualized treatment plan for you child's needs. If you think your child may be in need of occupational therapy, please contact us for a consultation or screening; we can also discuss the possibility of in-home services with you at that time.

During initial consultation, our staff will meet with your child to obtain information pertaining to medical history, medication/supplement use, diet history, behavior patterns, and feeding issues. At that time, we will also discuss basic nutrition education, and if indicated, will provide a meal plan. Nutritional and health goals will be set, and a nutrition report will then be provided to both your child's pediatrician and family.

Our follow-up sessions will focus on nutritional goals we set, and all eating behaviors and patterns will be reviewed. We will provide continuing nutritional education that will benefit both the child and family.

Medical Nutrition Therapy Counseling is provided on the management or prevention of the conditions such as:

We provide scheduled evaluations for your child which will help determine if they will require further treatment. Our therapists will then implement an individualized treatment plan for your child's needs. If you think that your child may be in need of nutritional counseling, please contact us for a consultation or screening; we can also discuss the possibility of in-home services with you at that time.

What is Behavior Therapy?

Behavior therapy is an individualized, play-based therapy that is molded to best fit each individual child. The goal of behavior therapy is to decrease challenging behaviors and increase appropriate behaviors. We achieve these goals with a focus on social and communication skills to help your child thrive in everyday life. With required parent involvement, we ensure that the strategies used will translate to home and school so that your child is successful in every environment.

Why Choose TherapyTown for Behavior Therapy?

TherapyTown offers a unique team-based model of care for a whole-child approach to intervention.  Our Occupational, Speech, Physical and Nutrition Therapists are excited to coordinate their care with our Behavior Therapist who has recently joined our Team.

Does my child qualify?

Coming this Fall! We will provide a calendar of events and classes!